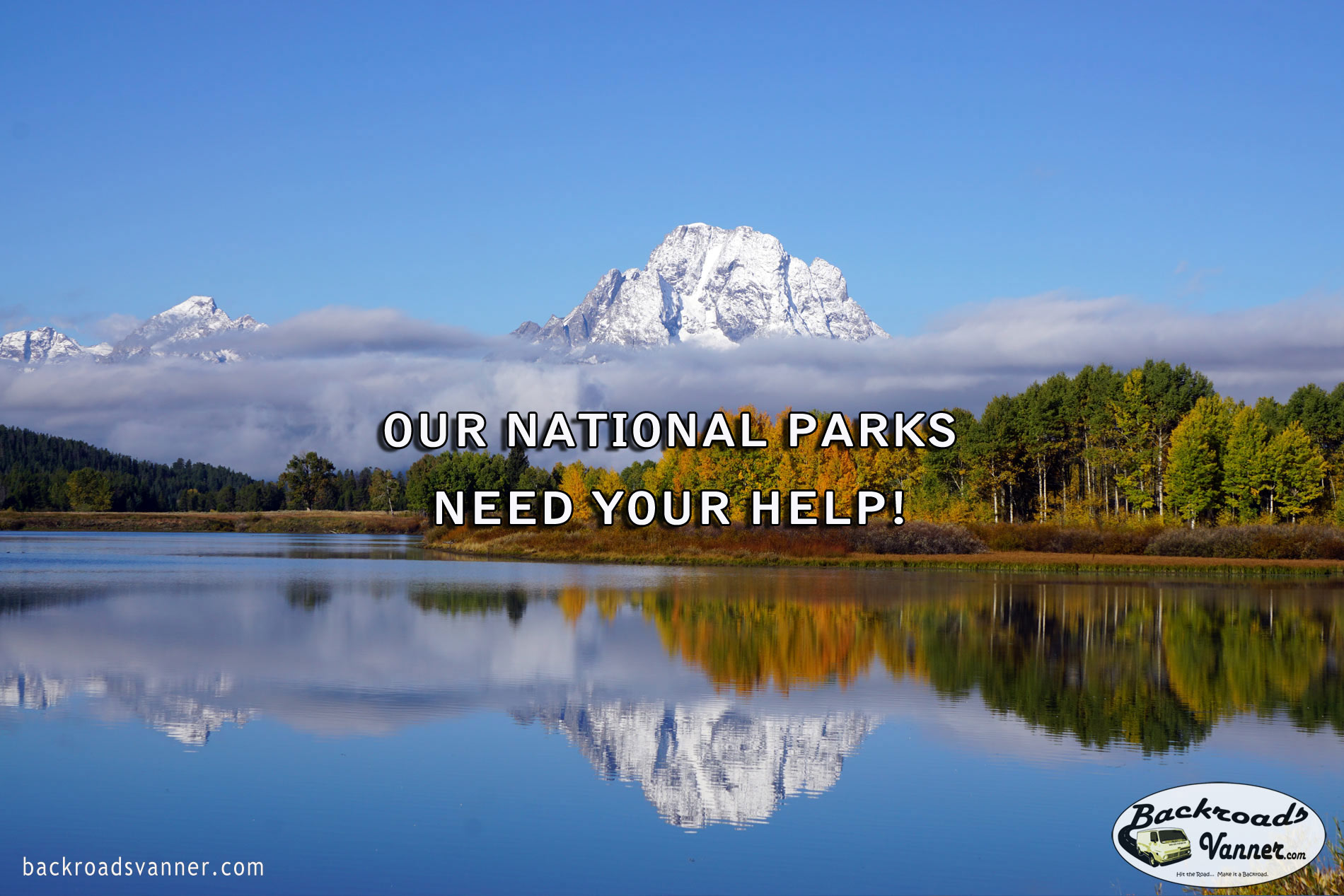 Did you know that the amount of funding for our National Parks is in question as Congress decides on the budget for 2016?  And beyond that, if Congress fails to agree on a budget, the whole government could shut down, including our beloved National Parks – just like 2013 and 1995.

Would you like to help?  One easy way to help is to spread the word and share this post (you can do so by clicking the share buttons at left or on the bottom of the screen on mobile devices). Tell everyone you know to go to the National Parks Conservation Association web site link below and enter their name and address into a simple form, which will automatically send to their local Senator & State Representatives.  Let your passion for our Parks and YOUR voice be heard! IT ONLY TAKES A SECOND!!

With the National Park System Centennial fast approaching in 2016, now is the time to stand on the side of our national parks and make sure they have the funding they need to protect our nation’s most treasured sites for another 100 years. Please support this vital and necessary budget proposal. Click here to help!

Click Here To Tell Congress To Fund Our Parks!

If you’ve ever been to a National Park, then you’ll probably agree that to experience a National Park is to experience the best of the earth – to revisit the wild and splendor of nature as God made it.  No matter how many times we visit Grand Teton National Park or Yellowstone National Park, or any of them, really, we are in awe of the beauty and mysteries to behold.  If you’re a history buff like we are, or love documentaries like we do, you’ll also love the history-laden, rich stories of how our National Parks came to be as told by Dayton Duncan and Ken Burns in  “The National Parks: America’s Best Idea.”

Since we LOVE our National Parks so much, we are passionate about supporting them and learning about their history.  Did you know it was a fight – a “pulling tooth and nail” struggle – to get our National Parks designated as such by the American Government – and thus be protected lands?  In most cases, it was the tireless work of a few passionate souls who fought, sometimes for their entire lives, to get the government to protect specific – and splendid – areas around the country.  You see, government protection meant that it was a start in the right direction to keeping prospectors at bay.

But even when the government gave it some protection, it often didn’t appropriate any money to maintain that protection.

It is still a battle, even today, to keep these beautiful places protected!  Can you believe that? Our National Park System has a huge backlog of repairs and upgrades that need attention but with budget cuts and less funding appropriated for them, our Parks suffer.

Here is a great article explaining the economics of the National Park System, how much they’ve suffered in cut-backs year after year, and how little money they actually need – “the average American household pays as much for our national parks each year as it would cost to buy a cup of coffee.”

In this day and age, after all the struggles to even have our National parks created into existence, you’d think congress would appropriate the necessary money to this ever-lasting gift for our future generations.  But they don’t always do so.  I hope you’ll STAND WITH US and tell your Senators and Representatives to FUND OUR PARKS! IT ONLY TAKES A SECOND!!

And that includes NOT LETTING OUR PARKS EVER BE SHUTDOWN!  Do you remember when the government SHUT THE PARKS DOWN in October 2013?  We remember!  We were visiting Arkansas in October 2013 and we experienced the shut-down firsthand. We were saddened that we couldn’t go into Hot Springs National Park but the real maddening thing was that the government let the entire Park system be shut down – employees and all.  We felt so bad for people who had planned vacations across the country in our Parks, some as once-in-a-lifetime trips, and they suddenly had their plans changed for them.  For some people, it may have been there one time to try and go see Yellowstone National Park or Yosemite and now they were turned away… “Sorry, your park is CLOSED!” And those who were already there – day visitors and campers alike – were told to leave the Parks immediately.  That’s just sad. And this wasn’t the first time the government shut down our National Parks!  It’s a crying shame that all the people before our generation who fought so hard for the creation and protection of our Parks, depleting their health, their life savings, sometimes their relationships and even donating their land, would be dishonored now.  And it’s not just a dishonor to the people of the past, it’s also a dishonor to the people of the present who want to enjoy them NOW – and to the people of the future – not to keep our National Park system well-funded and well-protected.

As I mentioned, there have been key people who fought tirelessly to get the government to protect these precious lands – and presidents and leaders who “got it” and made it happen.  Even wealthy land owners who had a passion for protecting the beautiful places in America, bought lands just to donate them back to the government to become National Parks.  And their forethought, fight and struggles to protect what we enjoy now, should not be forgotten. Here’s a very brief summary of how our National Park System came to be and where we are now:

During the spreading of American settlers across the continent, we were a new country with little in the way of rules and equally little thought to preserving the earth “as God made it” – or its wild animals – for future generations. The “vibe” of the day was to go west and strike it rich, or at least be able to start life anew in a new land. That entails finding a spot of land where you could set up shop and make money. Many prospectors were doing just that on what is now National Park lands.  Hotels were going up in choice spots, logging and killing of wild game was happening with no regulation or thought to the consequences. Buffalo were almost killed into extinction and the Passenger pigeon, once the most abundant bird in North America, was wiped off the earth forever due to hunting and destruction of its habitat. People were writing their names on geologic wonders and pillaging archaeological sites.

It was a free-for-all in America.

Thank the Heavens there were sensible people “shouting from the rooftops,” sometimes loudly, sometimes softly, until someone – anyone with power – would “get it” and start to put an end to the crisis that was brewing.

John Muir, one of the most infamous supporters of our National Parks, feared that as long as something was “dollarable,” man would try to conquer it.  John Muir’s lifelong and tireless efforts to get people to pay attention to the notion that “wilderness” needed protection, came to the attention of the nation, and one influential man in particular… President Teddy Roosevelt.

But it was Teddy Roosevelt, our nation’s 26th president, with his passion for the outdoors and his lasting impressions from a personal tour of Yosemite from John Muir himself, who really knocked it “out of the park.” During his 7-and-a-half year term as President from 1901 to 1909, Teddy Roosevelt signed into law: 5 new National Parks, 18 National Monuments, 51 Federal Bird Sanctuaries, 4 National Game Refuges and over 100 million acres of National Forests! There was no precedence for his actions and after signing the newly created Antiquities Act in 1906, he used that foundation to unilaterally sign these places into a protected state of being. Wow, Roosevelt is our hero!

Prior to August 1916, there was no official government entity looking after and protecting the National Parks.  And bad things were taking place in all of them – logging, killing of animals, fleecing of tourists, prospectors and hotels still popping up, vandalizing 1000+ year old trees, and the list goes on. When the National Park Service was signed into existence on August 25, 1916 by President Woodrow Wilson, a new body of the government was created, then headed by passionate park supporters, Stephen Mather & Horace Albright, for the sole purpose of protecting the 35 national parks and monuments at the time and those yet to be established. Thankfully!  Just 100 years ago, our Parks received a dedicated group to look after them.  Now we just need congress to keep appropriating the right amount of funding for them to do their jobs!  Tell them to do just that, by clicking here! IT ONLY TAKES A SECOND!!

In our era of rapid improvements and “digitalness,” we tend to look back at history as stuff that happened so long ago that it can’t possibly be relevant now – or that it’s already set in stone.  But in the grand scheme of history, 100 years ago isn’t that long ago at all!

Click Here To Tell Congress To Fund Our Parks!

Feel free to leave your thoughts and comments in the form below!

Written by Shannan for BackroadsVanner.com