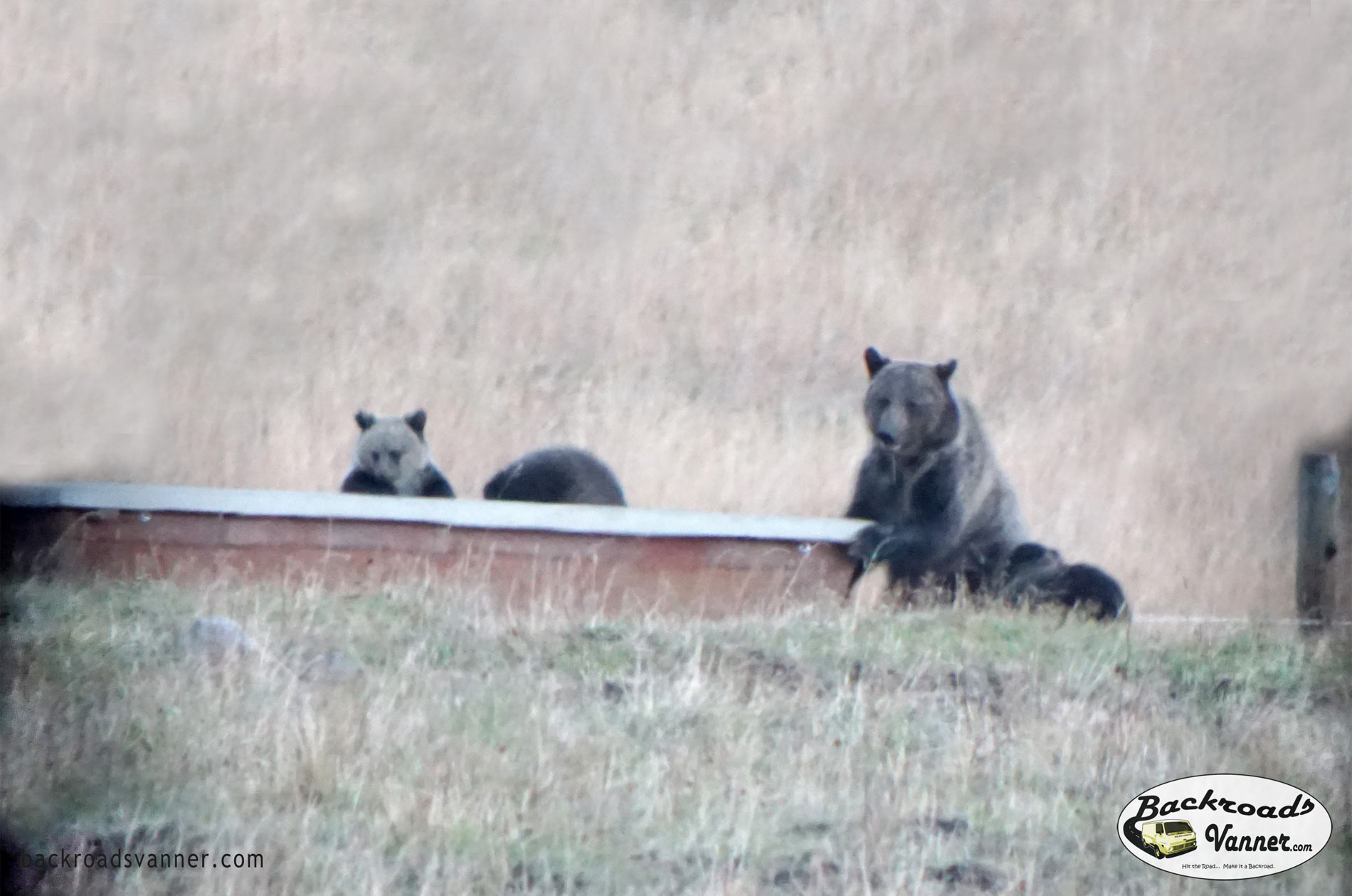 Grizzly bear cubs love to play! Do you see the white faced cub? So cute. (This photo was taken with our Sony a6000 lens up against a Swarovski Spotting Scope that another person had - we got lucky! However, we didn't have a camera attachment to affix our a6000 to the spotting scope which would have created a better photo. In contrast to this photo, the far-off shots of the grizzlies in the field are with the Sony a6000 with the SEL55210 lens without using the spotting scope.)

Did you know that, even though grizzly bears are on the Endangered Species List, the U.S. Fish and Wildlife Service (and other agencies) are ON THE VERGE OF LETTING GRIZZLY BEARS BE HUNTED FOR SPORT around Yellowstone and other protected areas?

One of the most amazing things about going to Yellowstone, is being able to “hunt with your camera” (see our friend’s #huntwithyourcamera campaign on Facebook) and see wildlife and take their photos. Then the next visitor can do the same, and so on.  The animals are protected and Park visitors get to enjoy them.

Even if they ban trophy hunting at the park boundaries, the animals don’t know those boundaries. Since the animals roam freely in the whole region, collectively referred to as the Greater Yellowstone Ecosystem, allowing trophy hunting even near the Parks, means the Yellowstone grizzlies will be targeted. If these animals are shot and stuffed and displayed in some trophy hunter’s cabin, no one else gets to see them, let alone the loss of life for the animal and likely its cubs.

“Passionate discussions are occurring behind the scenes” about whether trophy hunting of grizzly bears should be allowed around Yellowstone National Park. Park Officials “want to ensure bears like Jackson Hole grizzly 399 and her family — widely considered the most famous bears on Earth — are not needlessly killed if states bring back a trophy sport hunt. Grizzly 399 is” a mama grizzly who has become famous, in part, due to a photo-pictorial book by Thomas Mangelsen about her and her offspring and their life in and around Grand Teton National Park, part of the Greater Yellowstone Ecosystem. “Come spring, she is expected to emerge from hibernation as a 20-year-old mama with new cubs.”

“One Jackson Hole outfitter has said that if grizzlies are ever delisted, the first bear he intends to legally target is 399 because he hates the federal government, bear-loving environmentalists and the Endangered Species Act that has given bears special protection since 1975.” Please check out the story for more information!

If you disagree with this, especially the last sentence above about a deliberate hunt to kill the infamous grizzly known as 399, please speak up and let your voice be heard. Please get involved, share posts like this and contact the agencies involved.

Yes, the number of grizzly bears has risen since they were put on the list, but a hunt on grizzlies for sport could undo all of these years of protection. OUR collective voice can make a difference.

And by the way, for those who argue in favor of trophy hunting due to news reports of grizzly bear attacks on humans, here is some interesting data for you.  Most of the cases where grizzlies have attacked humans in the Greater Yellowstone Area were due to human error – Park officials say that most hikers in bear country do not take the recommended precautions as plastered all over the Parks and at trail heads.  For instance, it is advised to only hike with 3 or more people, yet most of the attacks were on solo hikers who likely surprised the bear.  Furthermore, none of those attacked in Yellowstone in recent years had the recommended can of bear spray with them.  More on being prepared in grizzly country coming soon….